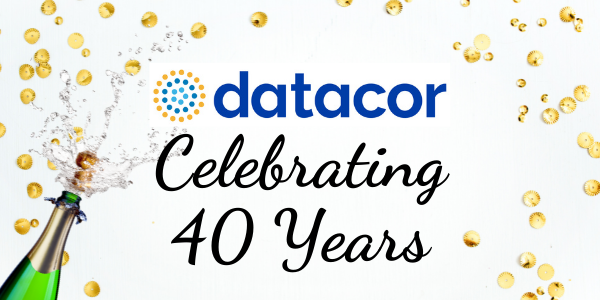 As a leading software provider these past four decades, Datacor’s products have become synonymous with the process manufacturing and chemical distribution industries.

Today, its Enterprise Resource Planning (ERP) and Customer Relationship Management (CRM) systems are trusted by businesses around the world to help optimize their sales, harness data, monitor and manage performance, and meet the ever-changing needs of their customers.

Datacor ERP and Datacor CRM are now used by more than 20,000 daily users and over 600 companies globally.

The Birth of an Industry Leader

Things sure have changed a lot since 1981. Back then, computers were a rarity in the workplace and this nascent technology was reserved for those with deep pockets and plenty of floor space. There was no internet, no cloud, and the software that was available was mainly used for simple accounting tasks or basic administration.

It was perhaps serendipitous that a squash game between friends was the stroke of good fortune that would eventually lead to the launch of Datacor.

The company was the brainchild of programmer Dave Rosenthal who was asked by the owner of a small family-run chemical company in New Jersey to come up with some software that could help with the day-to-day running of his business.

Coding started and the first version went live in 1981.

Such was its success, Rosenthal saw little reason not to roll it out to other chemical companies in the local area, so they too might also benefit from this unique software.

In the early eighties, computer hardware was expensive and cumbersome. The machines were large and underpowered, they suffered from poor connectivity, and had limited functionality. There was no such thing as networking, and early modems ran at a snail’s pace and could cost many thousands of dollars.

The concept of ERP did not exist in the 1980s – the acronym had itself not even been created.

If you had a computer system at all, it was reserved for accountants so they could keep track of who owed them money, who they had to pay, and as a general ledger.

It was an entirely new concept to have software geared more towards the operations side of a business. Could there really be a market for a niche product that combined operations, data collection, and analytics?

A few installations, and some positive reviews later, and it was clear it had huge potential.

The big break came a few years later in 1982, says Rosenthal, during a visit to the annual meeting of the National Association of Chemical Distributors (NACD). “It was at that moment we were able to talk to companies from around the United States and get a lot of great exposure.”

As word spread, businesses started to buy into the idea and the client base grew.

What made Datacor’s offering, at the time called Chempax, so unique was its focus on the very specific requirements of process manufacturing and chemicals. Rather than try to make generic software that appealed to a wide range of different industries, Rosenthal made the conscious decision to stick to this industrial segment and specialize.

“As I wrote and produced more computer code and won more accounts, I became more and more knowledgeable about the chemical industry I was writing it for,” he says.

“Our customers realized I wasn't just talking to them about bits, bytes, and disc drives, I was able to understand the difficulties they were facing and create software that actually helped. Unlike our competitors, I knew the issues and idiosyncrasies of the industry and that gave us a tremendous advantage.”

“Today, we still believe we know more about this type of software and the chemical industry than anybody else.”

By 1987, Rosenthal had decided to pursue a career as an academic and apply for a role as Associate Professor teaching computer science at New Jersey’s Seton Hall University.

Although he would continue working with Datacor on a part-time basis, he thought it prudent to find a successor. Sean O’Donnell, who had joined the business as its first sales rep a few years earlier, then took the leadership baton.

A civil engineer by trade with an MBA in information systems, O’Donnell’s business background provided the impetus for further growth and expansion while maintaining the core philosophy that had helped make Datacor so successful.

“I looked at things a little differently,” says O’Donnell, now Chairman. “I was asking customers and prospects what we needed to do to the application so they could use it and we could sell it.”

Over the coming years, hundreds of companies were using the software and embedding it within their operations. Datacor ERP was helping make businesses smarter, more productive, and more profitable.

Another Launch, Another Landmark

With O’Donnell at the helm, Datacor would reach another major milestone in 1996 – the launch of its groundbreaking Customer Relationship Management system.

Datacor CRM (formerly eChempax) had been designed to optimize every part of the sales process while integrating seamlessly with its existing ERP software.

It was a portal that empowered sales teams, providing them with instant access to customer information, order details, products and pricing to help inform decision making and strengthen relationships.

It quickly proved a popular addition to the portfolio.

A New Generation Focused on the Future

The third – and latest – phase of Datacor’s evolution would come in 2016 with Tom Jackson appointed President. Once again, he brought with him a fresh perspective.

Datacor’s philosophy had always been to meet the needs of its customers but also to help drive change. 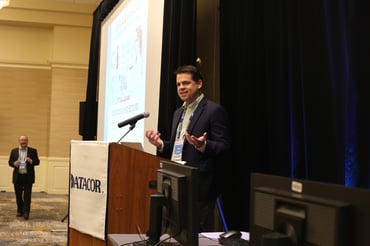 “Our customers know better than us how to run a process manufacturing or chemical company,” says Jackson, “but they rely on us to know how software and data can improve their operations. They want to improve their bottom line and I felt it was up to us to develop the products that enable them to do that.

“Our aim is to provide software that allows our customers to use data as a competitive advantage,” he adds. “Historically, we've probably been known more as an ERP and CRM company but now we provide all different types of software for our customers. We’re expanding the scope of those core products and we're working on a lot of new software and great acquisitions to help them improve their businesses.”

As the chemical industry has evolved, so too has Datacor. Development resources have more than doubled in the last few years to work on adding functionality to improving and expanding Datacor’s offerings, and its ever-expanding product range has been complemented by the acquisitions of TrackAbout, Procession, INFONETICS, and Chemstations.

Today, Datacor boasts a 135-strong team of industry experts, many of whom have spent their entire careers with the company. Their contribution cannot be understated.

From the development side, the product managers – Larry Alexander, Peter Frees and Charles Heresniak – deserve so much credit for creating powerful, easy-to-use applications. Those in the back office, including CFO, Richard Bartley, help ensure that everything keeps running smoothly, while our VP of Sales, Dan McCusker, keeps finding new customers to take advantage of our products.

To our customers and colleagues these past 40 years, thank you!

The ERP of Choice for Chemical Manufacturers & Distributors

Bring all of your back-end operations together to increase visibility and boost productivity.