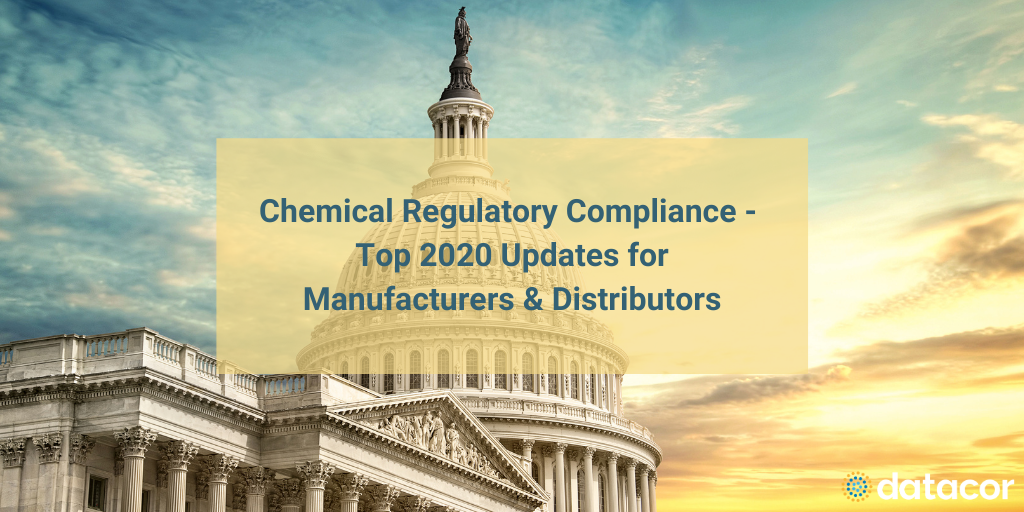 The chemical distribution and manufacturing industry is constantly changing, and keeping up with regulatory requirements can be challenging. We’re here to provide you with the latest chemical regulatory compliance updates, so you can stay informed and ahead of any changes.

In this post, we’ll cover several important pieces of legislation and the impact these have upon chemical distribution and manufacturing companies: the Chemical Facility Anti-Terrorism Standards (CFATS) program; the Paycheck Protection Program (PPP); the Generalized System of Preferences (GSP) trade program; the Miscellaneous Tariff Bill (MTB); and the proposed ban of PFAS (perfluorooctanoic acid) and PFOS (perfluorooctane sulfonate) chemicals.

CFATS renewal means now is time to invest in software

The biggest news in chemical regulatory compliance right now is the reauthorization of the U.S. Department of Homeland Security (DHS) Chemical Facility Anti-Terrorism Standards (CFATS) program. A three-year extension was signed into law on July 22 by President Donald Trump.

The CFATS program helps prevent terrorist attacks on high-risk chemical facilities through Site Security Plans, which are created and implemented based on the facility’s level of risk. These standards apply to any company that stores or distributes a chemical on the CFATS Appendix A: Chemicals of Interest list.

CFATS was created in 2007 and has been reauthorized several times since then, but many of the extensions have been short-term; the last long-term authorization was a four-year extension, passed in 2014. The July 2020 authorization extends the CFAT program for three years.

What does this mean for chemical companies?

The three-year authorization means the time is now for chemical manufacturers and distributors to invest in forward-looking security measures — including enterprise resource planning (ERP) software specialized for the chemical industry. These systems offer security and compliance functionality to help organizations protect their data and follow CFATS regulations.

Douglas Leigh is director of legislative affairs at the National Association of Chemical Distributors (NACD); according to a recent announcement from the organization, Leigh was instrumental in getting the CFATS reauthorization passed, “working day and night with industry stakeholders and congressional offices to push CFATS reauthorization over the finish line.”

“That we were able to get a three-year extension really is great for our members and for anybody who's regulated under this program,” Leigh says. “That allows you to look long-term when you're [putting] money towards building new fences, security, cameras, software — anything of that nature.”

The multi-year reauthorization makes the business case for chemical companies considering security investments, Leigh adds: “If you're able to point to the DHS regulation [and] say, ‘this is what we need in place to make our facility more secure and prevent any bad actors from infiltrating,’ your words and proposal carry more weight.”

NACD has supported the CFATS program since its inception as an important part of national security infrastructure, giving companies the support they need to protect their facilities and keeping communities safe.

The guidance the program provides is important, since inclusion is based on whether an organization’s chemical supply is above a certain threshold, as determined by Appendix A — which can be hard to keep track of, “especially for chemical distributors, where your inventory is changing all the time and [is] based on your customer needs,” Leigh says. Any change in business practices or items sold could move a company above the threshold and bring them into the program, he adds.

How does it work?

Under CFATS, chemical companies work directly with DHS to create an individual plan that “make[s] the facility more secure and combat[s] potential threats,” Leigh says. Unlike other regulatory bodies, where interactions between representative and chemical manufacturers and distributors can feel adversarial, the cooperation between DHS and NACD member organizations is “probably the best relationship between regulators and regulated that I've ever seen,” he notes.

Whether it’s a chemical manufacturer or distributor or a university’s chemistry lab, the DHS “has knowledge of what risks you should be most concerned about,” says Leigh. Their firsthand experience allows them to walk into a facility and make recommendations for security improvements based on the layout, the risk level and the nature of the organization.

“One of the great things about this program is DHS realizes that all facilities are not the same,” Leigh says. “They recognize that the Site Security Plan is going to be different for everybody. ... They're really great at working with the facilities, to find what's right for you. They're not going in there looking to find something wrong and fine you for it.”

The reauthorization not only gives organizations the green light to make needed investments and improvements in security infrastructure, it also further strengthens the relationship between organizations and DHS, Leigh explains, helping the department build a long-term program and reduce turnover and transfers.

Chemical companies get peace of mind with PPP loans

Another trend to watch in chemical regulatory compliance is the clarification of PPP loan repayment terms. The PPP was enacted as part of the U.S. Small Business Administration’s COVID-19 relief efforts in the early days of the pandemic, but the guidelines that needed to be met for loan forgiveness were vague, causing some companies to hold onto or not claim the money.

About half of NACD member companies applied for PPP loans, Leigh says, but “even those who applied were hesitant to use the funds just because there was really no direction and guidance on how the forgiveness process was going to be rolled out.” When Congress passed the second emergency relief package, the SBA issued clearer guidelines that enabled companies to more comfortably accept funds, he notes.

There is also legislation that has been proposed to fix an oversight in tax deductions, Leigh says, in which certain business expenses can’t be written off if they were paid for with PPP funds. The new legislation would make those business expenses tax-exempt, since this was Congress’ original intention — saving chemical companies that use PPP loans money and granting peace of mind.

Chemical companies should also look out for the reauthorization of the Generalized System of Preferences (GSP) program: a trade initiative that provides duty-free duty free relief for goods from designated beneficiary countries, Leigh says. In this way, the program offers a financial incentive for chemical companies that purchase materials from specified countries.

This is a largely bipartisan program, Leigh says, with the question being not whether to support it, but which countries should be included and what legislative package Congress can attach it to. Chemical companies that rely on imported products or ingredients can likely expect this reauthorization to come in the fall or winter of 2020.

Similar to the GSP, the Miscellaneous Tariff Bill (MTB) is a mostly bipartisan trade bill that is expected to be reauthorized sometime this year.

The MTB “temporarily or reduces or eliminates import duties on specific raw materials and other intermediate products that are used in manufacturing, but that aren't actually available domestically, so [companies] need to get [them] overseas,” Leigh says. “I don't think it's an issue of [whether] it’s going to be authorized, it's [whether] they can fit it into this year and find a vehicle to do so.”

If it isn’t passed this year, Leigh explains, Congress may retroactively authorize the program early in 2021, “which is a pain for everybody, because then you have to go back and look at what you would have used for GSP or MTB and then send that in. It’s just wildly annoying, confusing and time-consuming for members, and both of these [programs] apply differently across different industries.”

The final chemical regulatory compliance trend to watch is a potential ban on PFAS (perfluorooctanoic acid): a large class of 3,000 - 4,000 man-made chemicals that are used in products such as firefighting foam. The U.S. Environmental Protection Agency (EPA) has only thoroughly studied two of the chemicals in this class -- PFOA (perfluorooctanoic acid) and PFOS (perfluorooctane sulfonate) chemicals -- and found them to pose health risks. Military and airport firefighters have been using these products without knowing that two of the chemicals involved are harmful, leading them to use them more than necessary and polluting water runoff.

WWhile it’s important to study the health impacts of these chemicals, “a sweeping ban is always a concern,” Leigh says. Problems with the two identified chemicals have “kind of snowballed into a very bad name for the entire class, which is made up of thousands and hundreds that are in commerce and in movement,” he says. Leigh cautions against “completely ban[ning] the entire class of chemicals without studying them, as opposed to ... studying individual ones, and then making the determination whether or not they're safe for commerce.”

A classwide ban could have serious consequences for chemical manufacturers and distributors that rely on PFAS and PFOS materials, so these companies should make sure to follow the issue.

The NACD will keep members informed about these and other chemical regulatory compliance trends through their website and newsletter. You can also keep an eye on this blog for information about future trends that impact chemical and process manufacturers and distributors.

Learn more about how Datacor ERP can keep your organization secure and processes compliant, or sign up for a free demo to see it in action.

The ERP of Choice for Chemical Manufacturers & Distributors

Bring all of your back-end operations together to increase visibility and boost productivity.